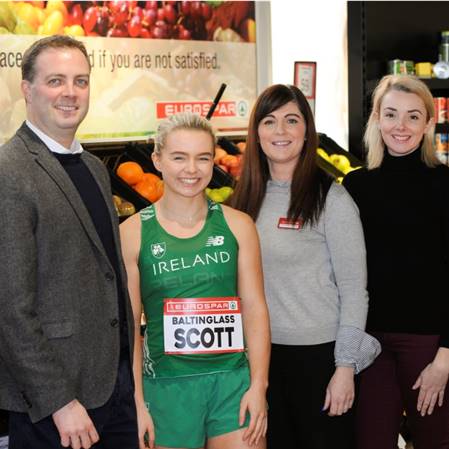 Molly, who was part of the Ireland 4×100 metre relay team who won the silver medal at the IAAF World U20 Athletics Championships in Tampere, Finland last year, is regarded as one of Ireland’s most promising young athletes.

A student at Carlow IT, Molly was also part of the Irish team who competed at last year’s European Championships in Berlin, and recently won the Women’s 60m Sprint and the 60m Hurdles at the Irish Universities Championships, setting new personal bests in both finals.

Third generation Retailer, William Quinn, owner of Quinn’s EUROSPAR Baltinglass, is understandably excited and proud of sponsoring such a talented young role model, “We have a strong bond with our local community and see this sponsorship as a perfect opportunity to show our appreciation by supporting such a remarkable young person,” said William.

“Molly is one of the shining stars, not just of Baltinglass and Carlow, but of Ireland and we look forward to playing a part in helping her realise her ambitions and dreams by supporting her with this sponsorship.”

The Quinn family have a strong association with the Baltinglass community.

William’s grandfather, also named William Quinn, started Quinns of Baltinglass Ltd. in 1936 at the same premises on Baltinglass Main Street. The shop bagged its own tea and sugar and bottled its own Guinness beer, even surviving rationing during the ‘emergency’.

In 1956 a neighbouring pub was bought and the premises for Quinn’s was extended. Ten years later the business evolved into a grocery shop and Quinn’s Bar. The shop was revamped and extended in 1987 and again in 2013 when it was redeveloped into a 7,000sq ft EUROSPAR Supermarket.

Commenting on the sponsorship Molly said, “I’m very grateful to William Quinn and all the staff at Quinn’s EUROSPAR for their generous support. It is so uplifting when your community supports you in this way.”

EUROSPAR Baltinglass provides employment for 25 staff locally and is open 7am to 10pm Monday to Saturday and 9am to 9pm Sunday.